on Willie Harvey: The Legacy - MilliUp!dotcom! Your SEO optimized title 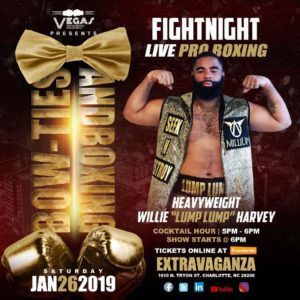 Willie Harvey: Boxing lineage runs deep for this heavy hitter who begin training out of New Jersey in the sport of boxing by the age 9. Aliased to his title name sake, is two words “Lump Lump,” that reciprocates only one way when it comes to afflicting punishment on that of his adversaries. Distance is such an important objective in learning how to box in general, but Harvey found his inspiration in close proximity from an experience boxing veteran in his father “William Bo James.” Yes, very true fight fans, his boxing pedigree is cut from his father pugilist cloth contending with the likes of Bernard Hopkins, John Mugabi and David Telesco. Though his father campaigned at Super welterweight in his career, Harvey tallied the scales at heavyweight since the inception of his boxing authority. Harvey, had this to say about his boxing vanguard splitting the ropes in Charlotte NC for his next fight January 26, 2019.

“At this point I’m working to be champion. I’m originally from Newark New Jersey currently training out of Charlotte boxing academy. Lump Lump mean that I’m going to fu*k my opponent up and in 2019 I’m trying to make it happen.” I been in the ring with a lot of greats, Kevin Johnson, Monte Barrett, Maurice Harris, you name it, I’ve been in the ring with best of them.”

Moving forward in highlighting such a depth of boxing experience in Harvey career, I asked him at this point in his boxing journey, where is he trying to be within the next a year? and he responded;

Confidence comes with experience in the sport of boxing and from speaking with a fighter possessing the pedigree as Harvey, I can only imagine what his opponent may be pondering at the moment, heading into a night of heavy-handed artillery that is destined for fireworks from the opening bell. The heavyweight division is accompanied with sluggers who can change the momentum of a fight with one punch. Harvey also bantered the name of one of boxings favorite top ranked heavyweight challenger in Jarrell “Big Baby Miller, so if we’re linking up characteristics in style, well it’s going to be a short night in this most anticipated heavyweight collision only three weeks standing on the boxing battlegrounds in Charlotte NC. Fight fans the ink is dry, training camps will be nearing to a close and gloves will be laced up as a testament to their armored outfit waging a competitive belligerence in earning ultimate victory. Harvey left his fans with this,

“I’m looking forward to this fight January 26, my people, my fans. If you know me, I don’t play to many games in that ring, I try to get them out of there in the second and third round. “Somebody gotta pay for this, he better come in there ready.”

Willie is currently sponsored as a fighter by MilliUp LLC and fights wearing the MilliUp Logo.

Follow Willie Harvey on these social media links and hashtags: