on "In The Heart Of The Fleet" with Aaron Shevak - MilliUp!dotcom! Your SEO optimized title

“In The Heart Of The Fleet” with Aaron Shevak 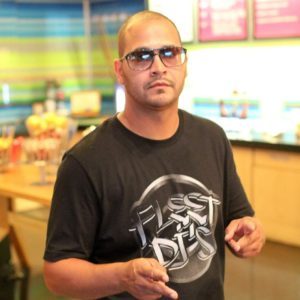 The definition of “Fleet” /flēt/:
(noun)
A group, engaged in the same activity… or under the same ownership.

When most people including myself think of the word “fleet” we imagine a large group of ships, vehicles, airplanes, etc… but rarely does when one hear the word “fleet” they think of a group of people, until now! Now, at least where I’m from in the southeastern region of the US, when anyone in the music industry mentions the word “fleet” the recipient almost ALWAYS immediately thinks of THE FLEET DJs COALITION because of their reputation for their corporate yet still (300+ members) family-like structured foundation of DJs/employees/entertainers and the respect they’ve earned as a brand nationwide

Born part latino in Passaic, NJ “Aaron Fleet DJs” as he prefers to be called was educated at Montclair State University and eventually began a career in marketing and promotions, he found my new single “Til I’m A Self-Made Millionaire” refreshing at the least of words.

and sits on the WWACN (World Wide Alpha Communications Network) board of commissioners.

Aaron Fleet DJs is actively involved in the latino community and still organizes civic and political events in New Jersey and North Carolina.

Aaron Fleet DJs made time to link up with yours truly (@cakalakgeorge) and we had a nice little pow-wow if I must say so myself!

Full of knowledge and experience, Aaron Fleet DJs sat with me as I told him some of my most intimate fears and concerns as a man, peforming artist, and business owner. I listened carefully just trying to soak up all of the advice that I could get as I chowed down over drinks and wings (lol).

During our conversation I mentioned that I have a new EDM style song on the way called #OutOfMyElement, that’s when Aaron Fleet DJs told me about “Fleet EDM” one of the many ways the the Fleet DJs Coalition is expanding beyond mainly the hip-hop culture!

Aaron Fleet DJs seems to me to be a complete business directory kind of guy with all of the folks he was mentioning in our conversation as well as other businesses. He’s a human dictionary of “what to-“, “when to-“, and “how-to”. I consider him myself as a good person/business associate, someone everyone should know, and for your success and mentorship Mr. Aaron Shevack I would like to personally award you with the #MilliUp stamp! Stay Up, Stay Grind’N homie it’s been a pleasure!

Truth separates the weak from the obsolete!