on Flag on the Play!! - MilliUp!dotcom! Your SEO optimized title

Flag on the Play!! 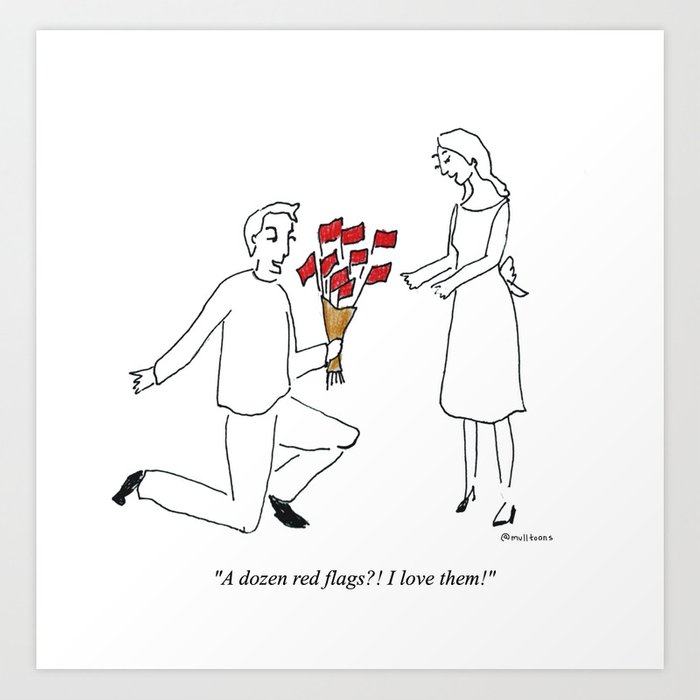 It’s all so beautiful. It’s everything you could have imagined. The perfect partner, the job, the perfect career opportunity. It all seemed too good to be true when the sparkle in your eyes was not only excitement, but also a glimmer of the red flags you have been catching here and there. Yet, you paid no mind. You continued the relationship, you continued to stay on that job, and you continued the path on a career of which you saw the signs you should have avoided it. You looked past all of the flashing bright neon, right in your face “HELLOOOO, DO YOU SEE ME?!” red flags, and why? Don’t feel bad, we all do it…

Just for kicks, we’ll run down the origin of red flags. Merriam Webster dictionary quotes a  “red flag” as a sign that a noticeable problem is present and should be dealt with. It can also be something that signals when things seem too good to be true. Kinda like that real fine dude you’ve been dating, yet you notice how many questions he asks and phone calls he makes to you when you are out with your homegirls. Hm, it’s giving “insecure and controlling” vibes sis. Or the shorty you love to kick it with, but down talks you as a man in the slickest ways. Run brotha’. Anyways…So red flags were typically utilized during military battles of the 1600’s where there was not any technology available for communication. Red flags were signals of the opposing army approaching as a threat. How many of y’all are in battlefields right now, and signals of violent intent from the enemy have presented themselves, yet you continue to look right over the RED FLAGS, making their approach that much easier.  The enemy stands a better chance of winning when we miss the red flag signals, that goes for the historical military battles from the 1600’s, and the 2021 battles of life we face currently.

So why is it that in these battle fields of life, love, career, success, family, and everything in between , we disregard red flags? Is it because (like me), maybe you expect that you are overthinking (I’m Queen Overthinker btw.). That maybe, it isn’t what it seems but you are just looking too deep? Or maybe you are under the impression that the red flags will subside. That with the right amount of confidence and faith, you can kinda wipe the smudges off and keep it pushing. Unfortunately though, a red flag is a red flag for a reason, and typically, it’s so stained in “red” that there is no cleaning it off. If it’s up, it’s probably pretty stuck.

I took a questionnaire to dig into how y’all really feel about “red flags” and the responses were relevant and similar across the board.  Which responses can you say resonate with you the most?

“Ultimately, that’s why I ignored red them in the first place, to have that feeling of wanting to to be loved and wanted” I would like to call this one the “I Need love” red flag overseer

99% sure most of yall can agree or relate to these participants’ statements. One of the number one reasons I found that individuals pass redflags is due to the fear of losing “love” or being left alone. Shoot, those red flags could be doing you a favor. The love you really see for yourself probably isn’t initiated by red flags anyway.

“I would lower my standards by ignoring the red flags b/c the person was cute or cool to be around in a friend case”. Let’s jot this one as the “Take a step down” red flag overseer

With this one, you knowingly, or even sometimes unknowingly, lower your standards to pacify individuals you were above to begin with,

Most of your “friends” are not your friends, and we get sent the red flags early on. The slick comments, the lack of of ambition or support needed from real friends to help spiral you into your intended path, or in general, how your lives do not correlate when you do a side by side comparison, your moving forward, their still stagnant (go back to the birds of a feather article for more on that). We fear our circle turning into a semi-circle so we choose to overlook and avoid the signs early on, that “homie” is only a phony and was never for you to begin with. Pay attention. They always tell you about settling in romantic relationships. Avoid doing it with friends too.

“I disregard them (red flags), because I try to be too transparent.” This one I would like to call the “I expect me, from you” red flag oversee-er. Hear me out on this one, it will take a little extra paying attention. I think a lot of times, we expect who we are as individuals from the opposite person as well. Being said, you try to present your best self in hopes that the other person will do the same. In doing so, we look past the red flags because we try to see the better in the person. We even see the potential of that person and in seeing the potential, we miss room for seeing the red flags. This could be dangerous because the thing about potential is, they could never reach it. It’s like being in love with an imaginary person. It’s a roll of the dice. Sometimes it works, sometimes it does not. However, the thing about being transparent is, we expect transparency as well, leaving our guard down and room for us to “okey doke” the red flags. A sticky situation.

“I knew something was weird about that company, because  I watched how they treated a coworker, but I figured naaa, not me” . The “COULDNT BE ME” red flag overseer.

I personally think this one is the most common. We see things happen to others everyday. On the job, on social media, in your homegirls relationship with her crazy boyfriend. I’m sure you hang up the phone after a girl chat and unconsciously think these very things could never happen to you but, yea….they can

How many of you are “naaa not me” kinda folks? You see it happen right in front of you but you figure, naa not me.

A couple other candidates were a bit more hardcore.

“ Soon as i see a red flag, IM OUT!!” I call this one the “I aint got time” red flag overseer’er. This one is hit or miss . It could be good AND bad to see red flags this way. These individuals are prepared to hit the door without even trying to gain an understanding. Protecting yourself is always number one, but what if the red flag was just a wrong perception on your end?

All of these are reasons we overlooked red flags, but a few other candidates gave a little more wiggle room.

“I try to be careful with how I approach a red flag, I try not to assume because that can just end everything.” I call this the “Rationalizer” of the red flag overseer, the one that tries to analyze the situation and be a little reasonable. There is nothing wrong with this approach, and I actually found that many of us growing adults try to take this method.

Be intentional about approaching red flags. Ask the appropriate questions. Maybe the other individual is not aware of the red flag they are presenting, maybe they are. Either way, an approached conversation rather than a gathered assumption would be of benefit. Analyze the approach, if it doesn’t change, maybe it’s time to move forward and it really was a real red flag. How many times have you been mistaken or misunderstood? I am sure some of your own behavior can be seen as a red flag, but you wouldn’t think so. No one is perfect, so ask before assuming.You don’t know until you really know. You gotta be careful how you come about it because assumptions can end everything, when really it was just getting started.

So what do we do when red flags come flying by, waving in the air? One of my favorite responses from the questionnaire is quoted as, “When I see a red flag, I trust my gut. It never steered me wrong.” We can pay homage to noticing these red flags to what I like to call our “6th sense” (that’s another article in itself). However, our 6th sense typically never lies to us. It’s that little voice in our head telling us to turn the other way. It’s that gut feeling we get when something just is not right. It’s the eyebrow raiser we get when we notice a RED FLAG. Pay attention to that 6th sense. She typically does not lead you astray in noticing and reacting to the “red flags” in different areas of our lives. Sometimes the red flags subside and can just be concluded as a misunderstanding, but most of the time, they are “early indicators of a person’s character” .

In conclusion, take heed to the red flags, the signals of distress, and ultimately speaking outside of the battlefields of the 1600’s, the red flags of life that we can relate to as the words and actions outside of your standards. Whether it be friendships, romantic relationships, career paths, and even personal choices we choose to make for self satisfaction, stay coherent and alert, stay on standby, eyes wide and vision clear, ready to catch red flags. Analyze them and decide which ones can be resolved or which are a no and just gotta go.

I like to believe I fit in the “rationalizer” red flag oversee’er column. Good read, and I couldn’t agree more to always trust your gut. Instinct has kept me alive, in business, & untarnished for a very long time! #MilliUp